The culture of Haiti is an eclectic mix of African, Taino and European elements due to the French colonization of Saint Domingue and its large and diverse enslaved African population, as is evidenced in the Haitian language, music, and religion.

Artists paint in fable as well. People are disguised as animals and animals are transformed into people. Symbols take on great meaning. For example, a rooster often represents Aristide and the red and blue colors of the flag of Haiti, often represent his Lavalas party.

Many artists cluster in a ‘school’ of painting, such as the Cap-Haïtien school, which features depictions of daily life in the city, the Jacmel School, which reflects the steep mountains and bays of that coastal town, or the Saint-Soleil School, which is characterized by abstracted human forms, and is heavily influenced by Vodou symbolism.

Jacmel, the colonial city that was tentatively accepted as a World Heritage site, is reported to be extensively damaged by the 2010 Haiti earthquake.

Since the earthquake of 2010, architecture has taken a huge turn. With damages at an estimated 10 million dollars, architectural measures were taken immediately. Directly after the earthquake Article 25 of the UK gained about 350 architects in 2010 looking to help rebuild Haiti. There was also a great effort made by the U.S. through the Architecture for Humanity effort that was iniated after the earthquake. The architecture style became very reasonable and involved minimalistic and functional style to help rebuild the damage in the most efficient way possible. There has also been a strong initiative to build more open-air clinics that are designed with health precautions as a huge priority. Source: Wiki 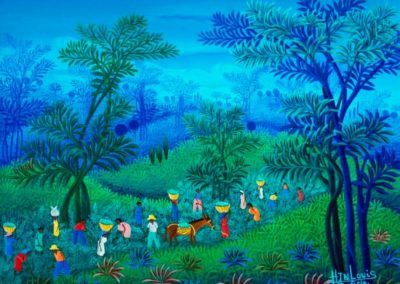 Henri Jean-Louis (born 1955) is a Haitian painter. Hailing from Jérémie, Jean-Louis typically paints landscapes featuring the colors blue and green. He is a master known for the depth of these colors, singling out his landscapes and scenes of everyday life in Haiti. See. haitianmasters.com for more information. 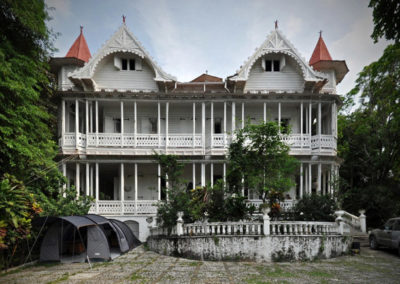 The 1912 Peabody House in Pacot survived the earthquake almost undamaged 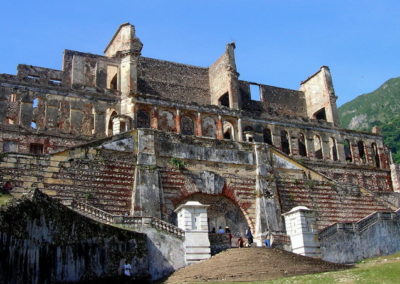 The Sans-Souci Palace is a palace in Haiti in the town of Milot, Nord, located approximately 5 kilometres (3.1 mi) northeast of the Citadelle Laferrière, and 13 kilometres (8.1 mi) southwest of the Three Bays Protected Area (source: Wikipedia).

The Citadelle Laferrière It is one of the largest fortresses in the Americas and was designated by the United Nations Educational, Scientific and Cultural Organization (UNESCO) as a World Heritage Site in 1982—along with the nearby Sans-Souci Palace. The mountaintop fortress has itself become an icon of Haiti. The Citadel was built by Henri Christophe, a key leader during the Haitian slave rebellion (1791–1804), after Haiti gained independence from France at the beginning of the 19th century (source: Wikipedia).